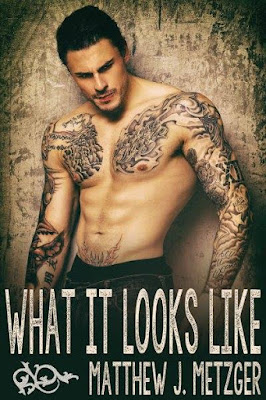 Eli Bell is the only son of a police chief inspector and a forensic scientist. He's grown up wonky in a world that only deals with the straight and narrow -- and his new boyfriend isn't helping.

Rob Hawkes is six feet of muscle, tattoos, and arrest warrants. A career criminal and a former guest of Her Majesty's Prison Service, he'd rather hit Eli's parents than sit down to dinner with them. One wrong move, and Rob could destroy Eli -- and his family -- without a second thought.

Rob's not in control here -- and Eli's the one to blame.

Matthew J. Metzger is the front for a British-born author dragged up in the south of England as part of a typical nuclear family with three kids, a mortgage, and no dog because a dog would get hair on the carpet. A brief escape to the north to study focused his writing from daydreaming rambles to his first novel, Our Last Summer. It is unquestionably better than the dissertation he produced at the same time for his university degree, but probably not as inventive as the excuses he provided for missing classes so often.Matthew has since returned to the London area, and therefore lives mostly on the public transport. He suspects that his next few pieces will probably involve homicidal characters on the London Underground.For more information, please visit matthewjmetzger.wordpress.com.

a Rafflecopter giveaway
Posted by Unknown at 7:00 AM