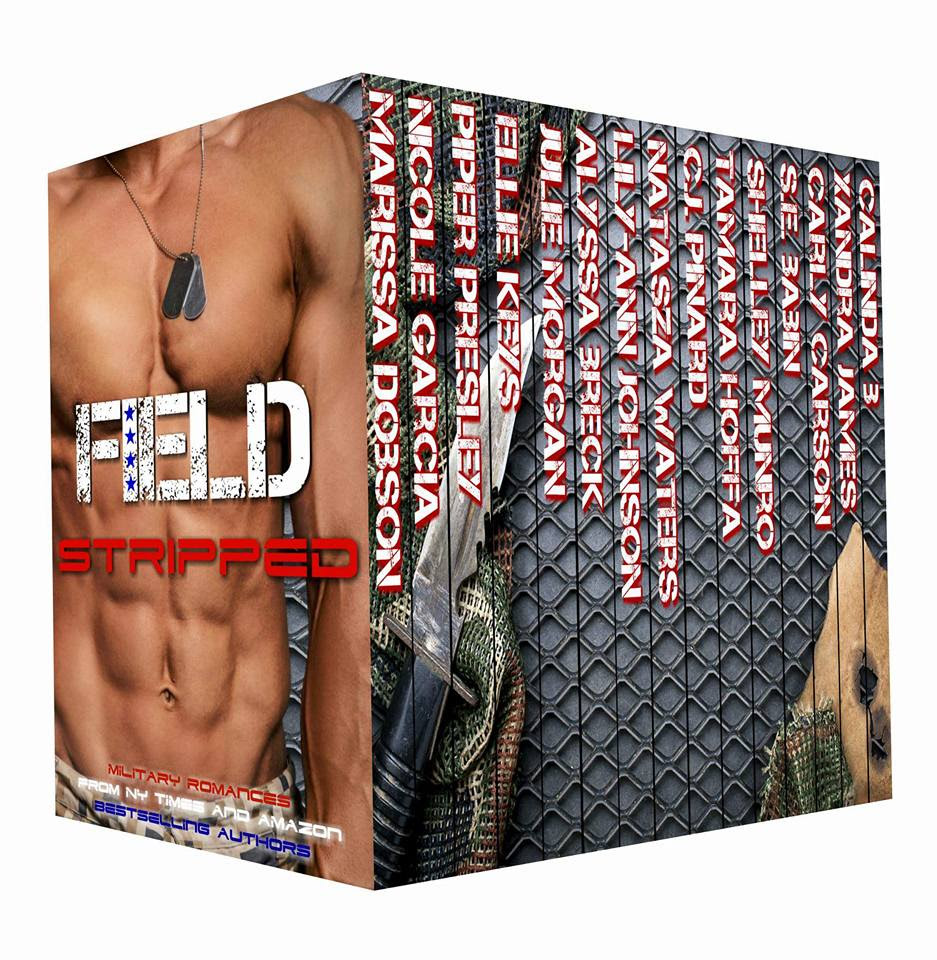 15 Steamy Military Romances from today's New York Times and Amazon Bestselling authors. GET STRIPPED with stories filled with love, romance, and smokin' hot alpha men sure to get your temperature rising.
Bestselling Author, Marissa Dobson Ace in the Hole: Ace in the Hole-Returning home from a deployment, Navy SEAL Ace Diamond finds the only woman he’s ever loved pregnant and living in his house. Gwyneth didn’t expect reuniting with the man who broke her heart. After all these years, will they give love a second chance?
New York Times Bestselling Author, Nicole Garcia Saving Private Blue: Savannah has endured years of heartache ever since Billy broke up with her and joined the Army. Her only comfort is Travis, Billy's brother. What happens when two brothers love the same woman? Can broken hearts be mended? Will true love prevail above all else?
Amazon Bestselling Author, Piper Presley Thorn of a Soldier: Young and newly married Marisa and Brody Clark will soon be separated when army soldier Brody gets deployed. Will Marisa remain Brody's devoted military wife or will an ex-boyfriend convince her to untie the knot?
Ellie Keys Belinda’s Mission: Belinda Banneker (B.B.'s) world has been rocked in more ways than one and only one person can set it to rights. The only problem is no one knows where this man, well no one, but B.B.
Bestselling Author, Julie Morgan Delta Force: Fighting in the war changed Logan Saunders. Facing the possibility of losing everything, he has to make a choice: In the line of fire, there is fight or flight. This is a fight Logan intends to win.
Award-Winning & Amazon Bestselling Author, Alyssa Breck Locked and Loaded: After society turned its back on him, ex-Army Ranger Hunter McKay finds a family in an outlaw motorcycle club. When Holly Farris' research lands her in a seedy bar, the biker and the journalism student collide. Can an ambitious young reporter win the heart and trust of a jaded former soldier?
Amazon Bestselling Author, Lily-Ann Jonson Blondie's Hero: When Teufel Hundens Bar & Grill needs a new bartender will Retired Marine Jake Peterson be the hero that Blondie needs? Or will hidden truths and her ex's anger have Blondie doubting not only Jake but their budding love as well?
Amazon Bestselling Author, Natasza Waters Committed to Chase: Combat took Jesse’s leg, but as a retired SEAL he has no regrets. He's got a new mission. Her name’s Charlie and the chase is on.
C.J. Pinard Antihero: He's dealing with a haunted past of crime and war. She's trying to stay clean and walk a straight path. Is the chemistry storming between them enough to keep them together?
Bestselling Author, Tamara Hoffa Healing Love: A sniper’s bullet shattered Army Medic Sandra O’Donnell’s shoulder and her sunny outlook on life. Can fellow soldier, Zach Winters provide the Healing Love she needs to fight the nightmares and dare to care again?
Shelley Munro Innocent Next Door: Special Air Services soldier Nikolai Tarei owes his neighbor and friend a favor, but looking out for his twenty-two year old niece is stretching friendship too far. Summer is young but her sex appeal, sassiness and brazen disregard for safety have Nikolai scrambling to protect both her and his battered heart.
Award-Winning & Amazon Bestselling Author, S.E. Babin Flight Risk: Just when he thought he’d gotten rid of her, Lennox King shows up as a combat photographer embedded with his unit. Brooks is in the hot zone already, but her presence is guaranteed to make it a scorcher.
Carly Carson Taken by the SEAL: Navy SEAL Declan Moynihan has orders to clandestinely shut down a notorious slave brothel in a Middle East war zone. Laila Catami, his accidental captive, is the mysterious woman being brought in to run the brothel.
Xandra James SEALed with a Vegas Kiss: SEALed with a Vegas Kiss- I'm in Vegas to stop a wedding. I've been in love with Molly ever since I could remember but I'm no good for her, so I've stayed away...when I could. But now her brother—and my CO—has found out the groom-to-be is a dick, and I have no intention of ignoring a direct order to take him out of the picture. My mission is to stop the wedding at all costs, but success hinges on whether I can keep my hands
Amazon Bestselling, Calinda B Blurred Lines: A lonely young woman meets a Navy submariner on leave. His heart has been broken; hers has never awakened. Will their lust-filled communion make a difference?

a Rafflecopter giveaway
Posted by Unknown at 7:12 AM