| iTunes | Barnes & Noble | Kobo
War is being waged against the Descendants and Saira Elian is desperate to stop the Mongers’ savage bid for power… Saira’s search for kidnapped mixed-bloods draws her into the Mongers’ stronghold, revealing the horrible truth behind the irresistible Monger ring and the vile plan to cleanse Family bloodlines … permanently. To prevent a brutal massacre, Saira and Ringo travel back to Bletchley Park during World War II where they team up with Archer from the past to crack a Nazi code and expose a Monger traitor intent on changing the course of history. They team with a female commando from the French resistance to hunt down an elite unit of Monger soldiers – Hitler’s Werewolves – before the terror squad can strike a fatal blow at the heart of the Allied war effort. Their desperate manhunt drags Saira, Archer, and Ringo into the London underground on the eve of a Nazi bombing raid where they come face-to-face with the Monger assassin on a suicide mission to split Time. With the lives of all mixed-bloods in peril, Saira must make a sacrifice that even Time and love may never forgive. 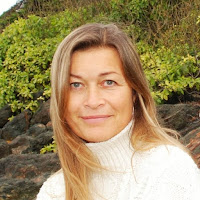 APRIL WHITE has been a film producer, private investigator, bouncer, teacher and screenwriter. She has climbed in the Himalayas, lived on a gold mine in the Yukon, and survived a shipwreck. She and her husband live in Southern California with their two sons, dog, various chickens, and a lifetime collection of books. April wrote her first novel, Marking Time because it’s what she wanted to read, and now needs to finish the five book series so she can find out what happens next.
Blog | Facebook | Twitter | Goodreads | Mailing List
a Rafflecopter giveaway