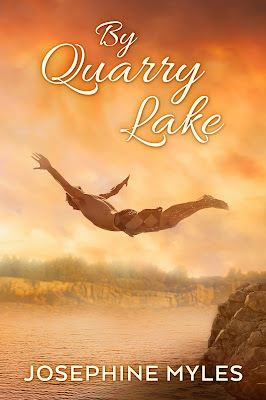 Still waters run deep...Tommy's been away from his home in rural Somerset for three years. Long enough to sort out who he is, and to get over the feelings of confusion and shame that blighted his lifelong friendship with farmer's boy Rob. He's out and proud, now--and he's coming home to claim back what he lost.Rob's the one who stayed behind, working on the farm with little time for a social life. With Tommy coming back into his world, he could have a lot to gain--and everything to lose.He's going to have to take a leap of faith. Straight into the ice cold waters of Quarry Lake.This story was originally published in 2013 as part of the Summer Lovin' anthology.

Tommy shivered and gasped. Quarry Lake was nothing like the public baths in Croydon. Bloody hell, how had Tommy forgotten how the cold water caressed every inch of his body, energising him every bit as much as it chilled? You could dive without goggles, no chlorine to burn your eyes. And when you surfaced, you swam up towards the clear sky, swallows flitting high above in their graceful dance.


And more to the point, there was Rob, just over there and definitely due a dunking. Fuck, but he looked good. Face and forearms deeply tanned, damp hair stuck to his forehead. Green eyes echoing the water they were swimming in. Rob smiled, but it wasn’t the carefree grin Tommy was craving. The one he remembered. There was something guarded about Rob’s expression. Something Tommy could only blame himself for.

Screw it, he didn’t know how to make this right. Plan A had been to just blurt it all out. Find a natural place to introduce it into the conversation. Oh, and by the way, I am gay after all. And totally single since I broke up with my boyfriend. Wanna crawl up onto those rocks and fuck each other’s brains out?

Tommy snorted. Like there was any way he could say any of that with Rob looking at him like he was little better than a stranger. And besides, that would make it all sound so impersonal. Like Rob was just a convenient body, rather than someone he’d yearned for all these years.

Plan B it was, then. Tommy dived down under the water, striking out for the deeps before flipping round to peer up for a shark’s vision of his prey. There he was, legs kicking powerfully . Rob looked almost too solid to swim. Like he was carved out of marble and should sink to the bottom, but there he was, flesh and blood.

Don’t think too hard about flesh and blood.

Tommy stopped fighting the water and let himself rise, aiming for Rob’s legs. He caught one, wrapped his hands around a pillar of muscle and hairy, goosebumped skin. He yanked down, not far. Just enough to dunk Rob’s head under the water for a second.

Letting go was tough when every part of him screamed to hold on. But that wouldn’t be much of a game, so he kicked away and surfaced a few feet away, just out of reach.

“Bastard!” Rob exclaimed, but this time when he looked Tommy’s way his grin was the one he remembered, wide and sunny. “You’re in for it now.”

“Can’t catch me. I’ve been training.” Tommy snatched a breath and ducked under the water again.

And this time Rob followed.

Tommy let himself be caught. Rob’s strong hands closed around his calf. It was almost perfect—if he’d only move his grip higher. Tommy made a token effort at getting away, but he didn’t want to. Not when those calloused hands were holding him like that, making him imagine other places they could grasp.

Good thing the water was so bloody freezing.

English through and through, Josephine Myles is addicted to tea and busy cultivating a reputation for eccentricity. She writes gay erotica and romance, but finds the erotica keeps cuddling up to the romance, and the romance keeps corrupting the erotica. Jo blames her rebellious muse but he never listens to her anyway, no matter how much she threatens him with a big stick. She’s beginning to suspect he enjoys it.

Jo’s novel Stuff won the 2014 Rainbow Award for Best Bisexual Romance, and her novella Merry Gentlemen won the 2014 Rainbow Award for Best Gay Romantic Comedy. She writes for publishers but has also been known to edit anthologies and self-publish on occasion, although she prefers to leave the “boring bits” of the ebook creation process to someone else. She loves to be busy, and is currently having fun trying to work out how she is going to fit in her love of writing, dressmaking and attending cabaret shows in fabulous clothing around the demands of a preteen with special needs and an incessantly curious toddler.

a Rafflecopter giveaway
Posted by Unknown at 7:15 AM