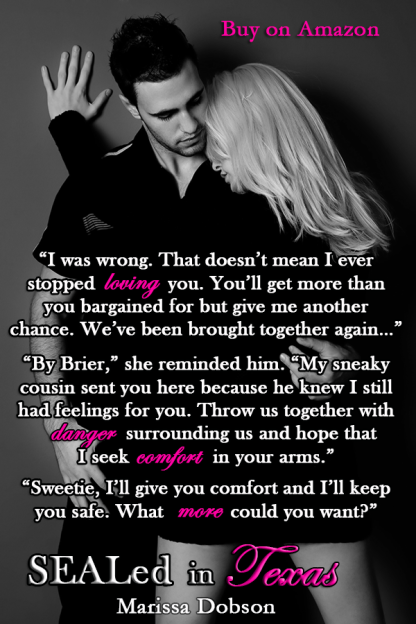 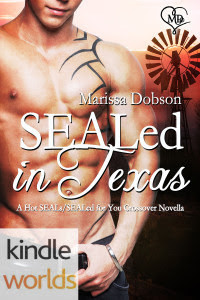 After sustaining injuries in the line of duty, Trever Alexander was forced to leave his SEAL team and all he worked for. In the midst of considering a job offer with GAPS, he was thrown into an assignment, one that brought him face to face with the woman he’d left behind. One day Allyson Mason is living a normal, quiet life, and the next she is on the run. She doesn’t know who or what she’s running from. All she knows is that if she wants to stay alive she has to keep moving. She calls the only person she knows that might be able to help. Chased by both physical and mental horrors, Trever and Allyson must put their emotions aside and work together.

She turned around to face Trever. “I can’t leave Texas.” “The fuck you can’t.” He now stood near the window, his back still to her. “You’re in danger here.” “Don’t you think I realize that?” Her voice rose, which was better than giving in to the tears she wanted to shed. How had everything worked out like this? It was supposed to be a simple run to the store, then Anthony threw everything away and dragged her down with him. “No, I don’t.” Trever turned back to look at her, his hand gesturing toward the door. “Otherwise you’d have been more careful. What the hell were you thinking, not even bothering to put the latch on the door? Are you hoping they catch you?” “I…I…didn’t think…” she stammered, knowing she had messed up. If Trever had gotten in without her hearing a sound, anyone could have. Someone else could have been waiting for her when she exited the shower completely unaware. “You’re right, you didn’t think, and you could have gotten yourself killed.” He stood there unmoving as if she went through this type of shit all the time. She was out of her element and she knew it. It was why she’d called Brier. “You’re the fucking SEAL, not me,” she spat. “It’s not like I run for my life every other day. I don’t know what the hell I’m doing!” She sank down onto the bed again and stared at the floor. “Maybe I shouldn’t have run. If I’d stayed I—” “You’d be dead,” He finished for her. He came around the bed to stand in front of her. “A drug deal? Damn it, Allie, are you hooked on that shit?” “What?” She looked at him, blinking as she tried to adjust to the sudden swing in the conversation. “If you’re messed up on that shit I need to know. I can’t have you strung out. In order to get you out of here I need you with a clear head.” “I thought you knew me better than that, Trever. I don’t do drugs.” Tired of her emotions pulling her in two different directions she forced herself to look away from him and let her gaze fall onto the duffel bag that held everything she now owned, which wasn’t much. “Just get out. I don’t need your help.” “I think you do.” “You left me…” The words were out before she could stop them. That simple statement was the root of the newest turmoil inside her and was the one reason she was rejecting his help, though she hadn’t meant to verbalize it. She didn’t want him to know that she still missed him. “That’s not what this is about.”

Born and raised in the Pittsburgh, Pennsylvania area, Marissa Dobson now resides about an hour from Washington, D.C. She’s a lady who likes to keep busy, and is always busy doing something. With two different college degrees, she believes you are never done learning. Being the first daughter to an avid reader, this gave her the advantage of learning to read at a young age. Since learning to read she has always had her nose in a book. It wasn’t until she was a teenager that she started writing down the stories she came up with. Marissa is blessed with a wonderful supportive husband, Thomas. He’s her other half and allows her to stay home and pursue her writing. He puts up with all her quirks and listens to her brainstorm in the middle of the night. Her writing buddy Cameron (a cocker spaniel) is always around to listen to her bounce ideas off him. He might not be able to answer, but he's helpful in his own ways. She loves to hear from readers so send her an email at marissa@marissadobson.com or visit her online at http://www.marissadobson.com.
Website ~ Facebook ~ Twitter ~ TSU ~ Pinterest ~ Newsletter
Posted by Unknown at 5:50 AM