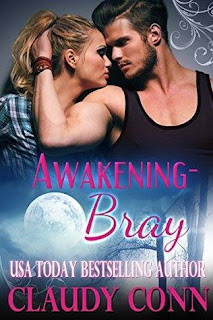 ☆*¨`☆Awakening-Bray ☆*¨`☆ ★★★ New Release ★★★ Author : Claudy Conn
Even as children they were forces to be reckoned with, but now Stevie and Wendy McChauncey and their friend Bray are all grown up. Stevie is a Druid high priest, Wendy is a Fios with blossoming Druid powers, and Bray has come into his majority as a Royal Fae Prince. And when Cain Crowton, a powerful alpha werewolf surrounded with an aura of dark magic, moves into the peaceful town of Golden, nestled in the Canadian Rockies, Wendy, Bray, and Stevie will have to use all the powers they’ve developed. For Cain is not simply a werewolf. His body and mind have been taken over by Valmod, a demon from another realm. Valmod tasted temporary defeat at the hands of Daoine Fae Kian and his vampire-shifter hybrid mate Harley. But he’s had time to recover and to plan his comeback. And he has chosen Wendy to be the mate by his side as he takes over the Human Realm, and beyond.